These are my personal notes from the August 2, 2022, meeting of the Newtown Township Planning Commission (NTPC). This is not a complete nor an official summary.

The applicant is seeking conditional use approval to open a seafood restaurant (Blue Point Grill aka BPG) at 3 West Road in the Newtown Shopping Center. This is the former location of the Corner Bakery, which is no longer in business at that location. The hours of operation will be 4 PM to 11 PM on weekdays and 11 AM to 10 PM on Saturday and Sunday.

Jack Morrison, the owner of BPG, confirmed that he is seeking approval for 145 indoor seats. Also, there are an additional 36 seats in an existing outdoor seating area, which will be used on a seasonal basis. Some PC members were concerned about the parking and traffic problems this number of seats would cause. The adjacent parking area, which is shared by TD Bank, has only about 40 spaces. Patrons would have to find additional parking across West Road in the Gap/ACME lot (see aerial view). 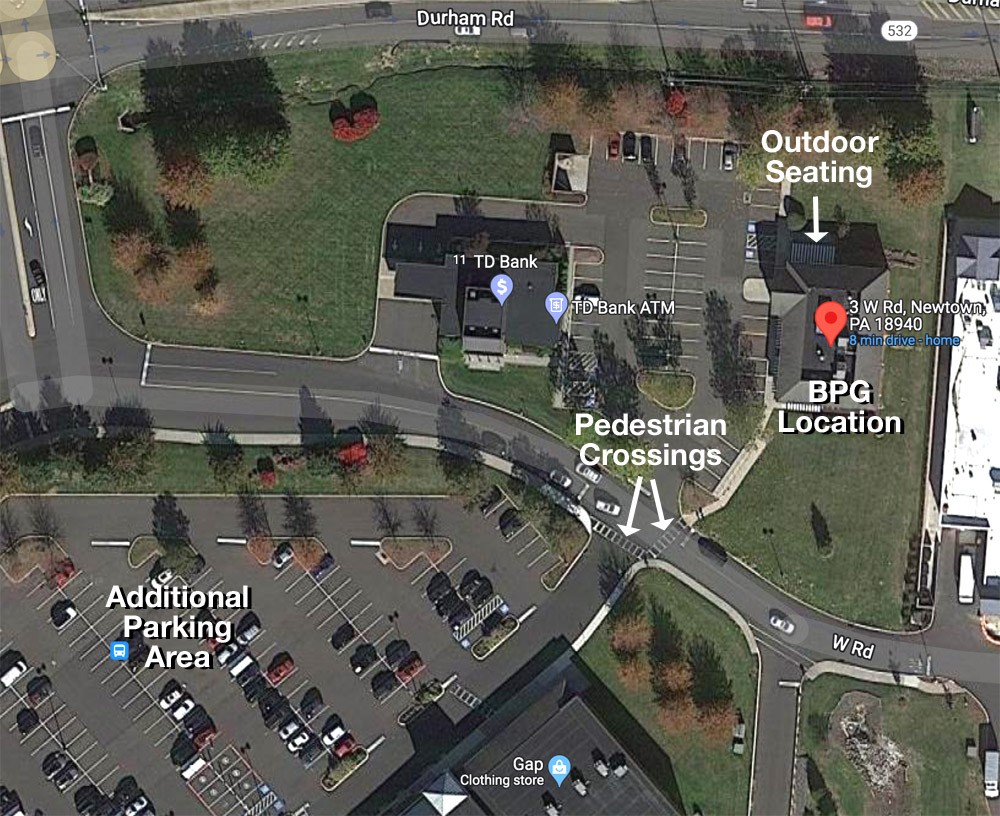 There was also crosswalk safety concerns as many patrons would have to cross West Road to get to and from their cars parked in Gap/ACME lot. It was agreed that these crossings would be made safer by repainting the bars to make the crossings more visible to motorists.

The application indicates that there will be 16 employees on each of three shifts. These employees will be discouraged from parking in the adjacent lot.

The floor plan includes an “Raw Bar” that seats 6 people and a regular "Bar" that seats 9 people. Recall that the Board of Supervisors (BOS) denied BPG’s application to transfer a liquor license from an East Rockhill Township tavern primarily because supervisors felt the Newtown was already over quota for liquor licenses (read “Blue Point Grill's Liquor License Transfer Not Approved”). Mr. Morrison informed the NTPC that BPG signed a contract to obtain a Newtown liquor license from Dolce Carini (Friends Bar & Grill), which has gone out of business.

Every CU application includes this clause: “The application states that this use will not disseminate any noxious, toxic, or corrosive fumes, smoke, odor, or dust. It further states that there will be no loud noise or vibration, or objectionable heat glare, or radiation beyond the property line and it will not create any other objectionable condition that will endanger public health and safety.”

Recall that Newtown recently passed an anti single-use plastics resolution that urges the business community and residents to consider alternatives to single-use plastics (read “Newtown Township Anti Single-Use Plastic Resolution Makes Local News”). I asked in Mr. Morrison if BPG would comply with that resolution when packaging “doggie bags” for patrons to take home. He said he would have no problem with that.

Mr. Morrison indicated the anticipated opening would be in March 2023. He also mentioned that in the future he would file a separate application to expand the restaurant. In 2016 the Princeton BPG was permitted to expand by adding an enclosed porch area with rooftop seating (see image below). Perhaps Mr. Morrison has something similar in mind for the Newtown location.

Although some members were concerned about parking, the PC agreed that it will advise the NT Board of Supervisors to approve this conditional use application.